On 05 December 1916, the polls opened at 8:00am, but the town’s women behaved as if it were any other day. Instead of rushing to the polls, the town’s female residents tidied their homes, ran their businesses, supervised their children. With the morning’s chores taken care of, the women hit the polls around 2:00pm—and it was obvious they had a plan.

Electoral participation in Oregon has a long, colorful history of citizen engagement. From the passage of Measure 60 in 1998, which established vote-by-mail as our standard voting mechanism, to this year’s adoption of the Motor Voter Act, which turns an opt-in process into an opt-out process through automatic registration through the DMV, voters in Oregon don’t mess around when it comes to exercising their constitutional rights. 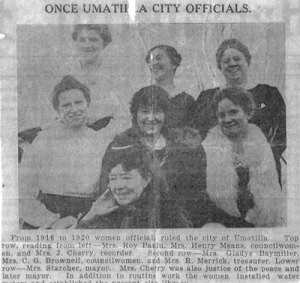 The Petticoat Rebellion of 1916 in Umatilla might take the cake for ‘not messing around’ with the voting process. Shortly after women gained the right to vote in Oregon, a council of women in the small town of Umatilla exercised their newfound right and took over not only the mayoral post, but the city council and several city government posts in a single, well planned clean sweep.

They didn’t stop there. Over the course of the Council’s four years in charge, they changed the direction of Umatilla city management.

Want to learn more? Read about the Rebellion here at Damn Interesting, or another take on the incident over here and over here.